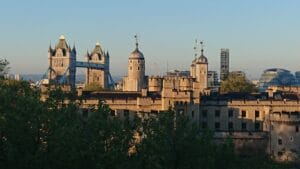 Despite being fortunate to live in a beautiful city, H and I felt in need of a change of scene and were lucky enough to snap up a cheap deal in an aparthotel in spitting distance of the Tower of London.

Our first outing was a walk from St Katherine Docks along the canal to Shadwell Basin which took us through a surprisingly green housing development with nesting coots, moorhens, swans and Canada geese. The price of the apartments

overlooking this loveliness will be of heart attack inducing proportions, I’m sure. We scuttled back to our room in time to avoid the thunderstorm which had been threatening to soak us, setting a pattern for the week.

We’d decided to visit sights we’d not have time for on our usual short trips so took ourselves off to Eltham Palace on Tuesday morning. Set in lovely grounds, it was originally an old manor house, parts of which date back to 1300. The Courtauld family bought it on a long lease in the ’30s, adding a fabulous Art Deco entrance hall which manages to be both grand and intimate. It’s a style I love and there’s lots of it on display, beautifully executed, including the family’s very own phone booth for which they

apparently charged their many guests to make calls. Perhaps that’s how they became so wealthy. They also had a lemur with whom they were besotted, allowing it free range around the house. Pity the poor cleaners…

Both H and I had long wanted to go to the Dulwich Picture Gallery so off we went on Friday braving the force nine gale that propelled us across Tower Bridge to the train station. Dulwich calls itself a village and is certainly pretty enough to deserve that description. The gallery is home to a permanent collection which includes a few 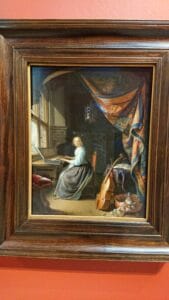 pleasing Dutch paintings but it was the reopening exhibition which really impressed. ‘Unearthed: Photography’s Roots’ included some stunning pieces of black and white photography, so crisp and modern it was hard to believe they were taken in the early part of the last century. My favourites were by Imogen Cunningham, a name new to me, but I’ll certainly be seeking out more of her work. Too blustery to linger in Dulwich for long but we’d both like to explore it further, preferably on a warm sunny day.

although my favourite bit was the ‘Italian Threads’ exhibition showing designs from MITA, a textile design group founded in Genoa, spanning the 1920s to the ‘70s but still fresh and modern. Like Eltham Palace, I’m not sure I’d have known about this small unsung gem were it not for my Art Fund membership.

Given how familiar we both are with London, H and I soon shed our nervousness, helped along by how safe we felt in our aparthotel and most of the places we visited. We never forgot Covid, of course, but if we had, the half mile walk stretching from Lambeth Bridge to Westminster Bridge past the memorial wall covered in pink hearts for those who’ve died from it would have

reminded us. Sobering, after enjoying a delicious lunch in the Garden Museum‘s café. It covers the wall beneath St Thomas’ hospital bang opposite Parliament which seems entirely appropriate.

And the books? I’d read almost half of Regina Porter’s The Travelers before we arrived, an ambitious novel told in interlinked episodes which explores race through two intersecting extended families, one black and one 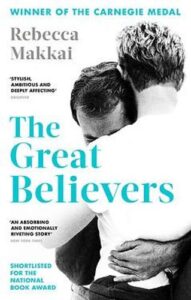 white, over six decades. Reading it in bite-sized chunks between explorations wasn’t conducive to keeping track of the large cast of characters. I should have finished it at home which is what I’ll be doing with Rebecca Makkai’s The Great Believers, a dual narrative with the lengthier

sections set in mid-1980s Chicago which sees a group of gay friends struck down by AIDS. Both enjoyable novels but neither a match for Eley Williams’ The Liar’s Dictionary whose striking scene in St James’ Park came to mind as we walked by the pelicans’ favourite lakeside spot. Once read never forgotten.

Unsurprisingly, given I’ve not set foot outside my home town for six months, a week in London has left me a tad worn out but despite that I feel as if I’ve woken up refreshed. Back to books soon…