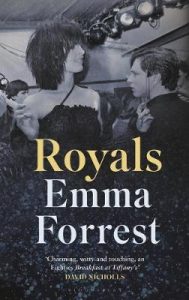 A multitude of paperback goodies to look out for this June, several of which fell foul of the pandemic-induced schedule changes that have bedevilled both authors and publishers for well over a year, including the paperback edition of Emma Forrest’s Royals delayed since June 2020. Forrest’s novel is about a working-class Jewish boy drawn into the orbit of a poor little rich girl, set against the backdrop of London caught up in royal wedding fever in 1981. Eighteen-year-old Steven’s violent father lands his son in hospital as he takes a punch for his mother. He wakes up to find himself alongside Jasmine, a fabulous creature who charms everyone with her dazzling attention, and the two instantly click. Forrest knows how to turn a striking phrase, telling her story with wit, humour and insight.

Anne Enright’s Actress also fell foul of schedule juggling, the paperback edition originally planned for earlier this year. Told through the voice of her daughter, it’s the story of Katherine O’Dell whose fame became notoriety when she committed a bizarre crime, apparently. ‘Brilliantly capturing the glamour of post-war America and the shabbiness of 1970s Dublin, Actress is 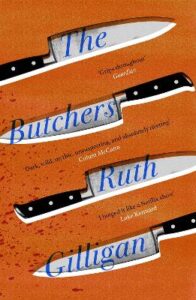 an intensely moving, disturbing novel about mothers and daughters and the men in their lives. A scintillating examination of the corrosive nature of celebrity, it is also a sad and triumphant tale of freedom from bad love, and from the avid gaze of the crowd’ say the publishers, whetting my appetite nicely.

Ruth Gilligan’s award-winning The Butchers is one of those books I very nearly didn’t read thanks to my own squeamishness and an off-putting blurb. It begins with the photograph of a naked man hung upside down from a meat hook in an Irish cold store taken in 1996 at the height of the BSE crisis. Gilligan tells the story of eight men who travel the country, slaughtering cattle following the old ways, through the twelve-year-old daughter of one of them, framing her novel with that dramatic opening scene and its consequences. It’s a striking exploration of the old Ireland, with its rich tradition of folklore and the struggle towards the new, through two families who are more entangled than they realise. Such an enjoyable book, and I could so easily have missed it were it not for fellow blogger Kim Forrester’s tweet. You can read her review here.

A teenager faces a difficult coming of age in Sanae Lemoine’s The Margot Affair in which the illegitimate daughter of a renowned actress and an influential politician lives in secrecy, ashamed of her parentage. Then she meets a well-connected journalist and takes things into her own hands. ‘In this simmering debut Sanae Lemoine explores private and public faces, truth and deceit, love and persuasion. The Margot Affair is a novel about the bone-deep bond 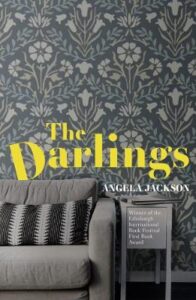 between mothers and daughters, the devotion and betrayal of friendship and the dangers of pushing beyond the boundaries of a life lived in the shadows’ say the publishers. Very much like the sound of this one.

Angela Jackson’s The Darlings looks at childhood trauma from an unusual angle through the experience of Mark the golden boy who kills his best friend in a freak accident at the age of fifteen. Sadie lifts him from the pit into which he plummets for years but when he meets an old schoolfriend he finds himself thinking she might offer a permanent route out of his guilt and misery. ‘This is a story about how childhood experience can profoundly impact how we behave as adults. It’s a story about betrayal, infidelity and how we often blinker ourselves to see a version of the truth that is more palatable to us’ say the publishers which sounds very promising to me.

Rumaan Alam’s Leave the World Behind caused quite a buzz when it was published, at least in my neck of the Twitter woods. Two families – one white, the other black -are forced into each other’s company over a long weekend on Long Island. One has rented a luxurious home as a respite from the hassles of New York only to be woken by a knock on the door by an older couple, claiming to be the owners, 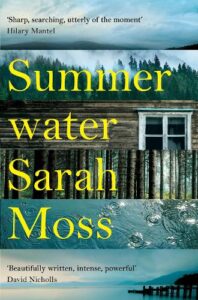 who’ve arrived seeking shelter after a citywide power cut. ‘Should Amanda and Clay trust this couple – and vice versa? What has happened back in New York? Is the holiday home, isolated from civilisation, a truly safe place for their families? And are they safe from one another? Are the couple to be trusted?’ asks the blurb. An interesting premise for a novel much loved by the likes of Kiley Reid and David Nicholls.

Set over a single drenching day, Sarah Moss’ elegantly slim Summerwater takes us into a set of chalets in a remote Scottish park where peace and quiet is shattered by the partying of one renegade family. Moss structures her book almost like a set of tightly linked short stories, dipping in and out of the chalet occupants’ long wet day, exploring their preoccupations through the thoughts running through their heads. Beneath it all runs the low hum of xenophobia, each of the holidaymakers giving the noisy chalet’s inhabitants a different eastern European nationality having not bothered to find out for themselves. Another superb slice of fiction from Moss, sharply observed and delivered with characteristic insight.

Despite my initial qualms about its wacky premise, I loved Robbie Arnott’s Flames and was keen to read The Rain Heron when it turned up. Set some time after a military coup against the backdrop of a world beset by weather extremes, Arnott’s novel explores themes of love, redemption and hope in the face of a 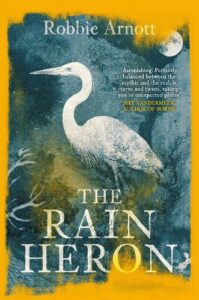 disaster of our own making through Ren, whose mission is to protect the titular bird, and Lieutenant Harker, the woman sent to track it down. I loved this novel, written in response to the bush fires that raged through Australia in early 2020 decimating its wildlife. Arnott conveys his message beautifully while bringing us face to face with the consequences of our action and inaction.

Last but not least, Carys Davies’ The Mission House is very different from her much acclaimed debut, West, yet they share the same fable-like quality. Set in India against the backdrop of rising Hindu nationalism, Davies’ novel follows Hilary Byrd, a timid British tourist who’s sought relief from the heat of the plains in a hill station, taking up residence in a bungalow offered by a priest he meets on the train up into the mountains. The priest has spotted an opportunity for his orphaned, disabled housekeeper, asking Hilary to teach her English. Hilary begins to see a future for himself but no one, it seems, has considered that Priscilla may have her own plans. A quietly thoughtful novel, immersive and humane which explores the consequences of 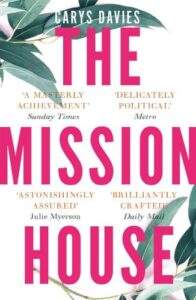 That’s it for the first instalment of June’s paperbacks. As ever, a click on a title will take you either to my review or to a more detailed synopsis for any that have snagged your attention. If you missed the month’s new fiction previews, they’re here and here.

I’m catching the train to London in an hour or two, planning to spend a week as a tourist and feeling oddly apprehensive about it. I’m out of practice at navigating my way around a city I’ve visited regularly every year of my adult life. H and I will be cautiously catching up with a few friends, visiting a few museums and putting our faith in our vaccinations. Wish me luck!