Whatever else 2021 brings us, and we can only hope it’s better than 2020, there are a fair number of paperbacks to keep us distracted, several of which I’ve read beginning with Sarah Leipiciger’s Coming Up for Air which neatly weaves together three apparently unconnected stories. A young woman jumps into the Seine on a frigid night in 1899. In the middle of the twentieth century, the son of a Norwegian toymaker diverts the sorrow of a terrible loss into developing a plastic doll. In the early twenty-first century, a Canadian journalist is awaiting a transplant, her lungs shredded by cystic fibrosis. Very different from her debut, The Mountain Can Wait, with its evocatively described Canadian backwoods setting, Leipciger’s second novel captivated me with its storytelling, so much so that I included it on my Women’s Prize for Fiction wishlist but, as usual, the judges didn’t agree.

They also failed to agree with me about Carol Anshaw’s Right After the Weather.  Set in Anshaw’s home town of Chicago in the months before and after the 2016 election, it explores both the state of the nation and the nature of friendship through Cate, a 42-year-old theatrical set designer determined to anchor her precarious way of life in a more secure future. When Cate interrupts an appalling act of violence all the cards of her life are thrown into the air, affecting both herself and her relationships with others in surprising and deeply unsettling ways. A quietly brilliant novel. 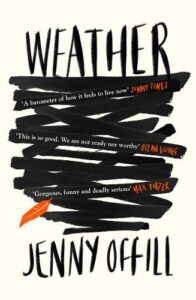 The judges and I did mange to agree on Jenny Offill’s Weather, her long awaited follow-up to Dept. of Speculation which appeared on the shortlist. Set against the backdrop of Trump’s America and the ever more urgent climate crisis, Offill’s novel follows Lizzie as she tries to take care of everyone while disappearing down an apocalyptic wormhole, responding to the emails of listeners to the podcast, Hell and High Water. Fragmented, non-linear and discursive, Weather really shouldn’t work yet it does so beautifully, approaching the crisis facing our planet with wit and panache, a constant ever darkening backdrop to Lizzie’s everyday dilemmas.

No chance of my next book appearing on the list as it wasn’t written in English although Len Rix’s translation was longlisted for the Warwick Prize for Women in Translation. Magda Szabó’s Abigail comes billed as the most popular of her novels in her native Hungary. Set in a girls’ boarding school, it’s about fifteen-year-old Gina, her head full of glamour and romance, whose officer father sends her away to the other side of the country in 1943 on the eve of the German occupation. Gina undergoes something of a transformation from an arrogant girl who thinks herself superior to her fellow pupils to a thoughtful young woman prepared to risk her own safety for her country. Szabó tells her story well, pulling its thread of tension taut as Gina’s danger becomes apparent. No match for either Katalin Street or Iza’s Ballad for 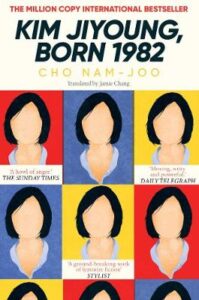 me, but certainly well worth reading.

There was a great deal of brouhaha surrounding Cho Nam-Joo’s Kim Jiyoung, Born 1982 when it was first published last year. A bright young woman, hard-working and exemplary, Kim has been forced into second place all her life by a patriarchal society which borders on institutionalised misogyny. Hard to make out much more from the blurb but it comes highly recommended by the likes of Sayaka Murata, author of Convenience Store Woman, who described it as ’a book about the life of a woman living in Korea; the despair of an ordinary woman which she takes for granted. The fact that it’s not about ‘someone special’ is extremely shocking, while also being incredibly relatable.’ It went down a storm in South Korea, apparently.

We’re staying in South Korea with Bae Suah’s Untold Night and Day which follows several parallel lives over a blisteringly hot day and night in Seoul. Twenty-eight-year-old Kim Ayami and her boss walk the streets of the city looking for a mutual friend after Seoul’s audio theatre for the blind shuts its doors for the last time. The next day, Ayami guides a crime novelist around the city as her missing friend had requested. ‘In the inescapable, all-consuming heat of Seoul at the height of the summer, order gives way to chaos, the edges of reality start to fray, and the past intrudes on the present in increasingly disruptive ways’ say the publishers which sounds good to me.

inspired by her stint at the lovely Mr B’s Emporium here in Bath. Her pieces are speculative ranging from a musician who befriends a flock of birds to two newlyweds inhibited by a large, watchful stuffed bear in their lives. I wonder if it’s the Orvis bear which disappeared mysteriously from outside our local branch. ‘Stories that start like delicate webs and finish like unbreakable wire traps’ according to Neil Gaiman.

That’s it for the first batch of January paperback goodies, all written by women. A click on any title that snags your attention will take you either to my review or to a more detailed synopsis, and if you’d like to catch up with new fiction previews they’re here and here.