March’s first batch of paperbacks kicks off with two excellent Irish novels, both of which I’ve read beginning with Naoise Dolan’s Exciting Times. Set in Hong Kong, it explores the supremely dysfunctional relationship between Ava and Julian. Ava is living in a scuzzy Airbnb and working as a EFL teacher when she meets Julian in a bar. They have little in common – Ava is from working-class Dublin, Julian is an Eton-educated banker – but eventually Ava moves into his spare room, then into his bedroom. When he’s away on an extended trip to London, she meets Edith and by the time Julian returns, Ava is faced with a dilemma. Dolan’s novel is full of smart social observations, tartly expressed through Ava’s snarky, self-absorbed voice, every insecurity minutely scrutinised. I loved it

Hilary Fannin will be known to many for her prize-winning Irish Times column. Alternating between 1995 and 2018, her first novel, The Weight of Love, is a delicately nuanced exploration of a long relationship at crisis point. When Robin meets Ruth, he introduces her to his childhood friend, Joe, all intensity and glamour in comparison to Robin’s quiet diffidence. Ruth moves in with Joe the following day and it’s not until her son is two that she and Robin meet again in Dublin. An absorbing carefully constructed novel, wrenching at times, which builds an intricately layered portrait of a complicated marriage as Ruth and Robin’s stories unfold.

Childhood friendships is also a theme which runs through James Scudamore’s English Monsters which is about men, specifically those who’ve endured boarding school, something H has described as preparing you well for prison. Max is sent away aged ten, plunged into a world of arcane rules and punishments compensated for by the companionship of new friends. Several decades later, a long-buried secret surfaces bringing them back together. ‘Spanning several decades, English Monsters is a story of bonds between men – some nurturing, others devastating. It explores what happens when care is 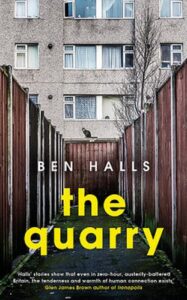 outsourced in the name of building resilience and character, and presents a beautiful and moving portrait of friendship’ according to the publishers.

At the other end of the social scale, Ben Halls’ The Quarry offers a small twist on state-of-the-nation fiction in the form of a collection of interlinked short stories rather than a straightforward novel. Set on the eponymous West London estate, Halls’ stories explore contemporary masculinity and changing gender roles through a diverse set of working-class men, apparently. That state-of-the-nation theme is catnip for me and this take on it sounds intriguing.

James McBride’s Deacon King Kong’s backdrop sounds as if it’s the Brooklyn equivalent of Halls’ estate. Set in 1969, McBride’s novel is about the repercussions of an apparently motiveless shooting which effects the entire neighbourhood, from Italian mobsters to the congregation of the local Baptist Church. ‘Deacon King Kong is a book about a community under threat, about the ways people pull together in an age when the old rules are being rewritten. It is very funny in places, and heartbreaking in others’ say the publishers who must have felt they’d hit the jackpot when Barack Obama pronounced it one of his books of 2020.

Claire McGlasson’s The Rapture is about a very different sort of community, The Panacea Society, a religious sect made up almost entirely of single women who patiently awaited the return of the Lord. Devoted member, Dilys, makes friends with Grace, a new recruit, but becomes wary of their leader’s zealotry. ‘As her feelings for Grace bud and bloom, the Society around her begins to crumble. Faith is supplanted by doubt as both women come to question what is true and fear what is real’ according to the publishers. The Panacea Society was based in a Victorian villa in Bedford, a town I lived in for a couple of years without the slightest knowledge of the cult’s existence. The last member died in 2012, apparently.

Continuing the community theme, Alan Isler’s The Prince of West End Avenue is set in a Jewish retirement home in

Manhattan. While the other residents squabble over their planned production of Hamlet, Otto finds himself reminded of his past life by the resemblance of a new member of staff to one of his old lovers in what the publishers are describing as ‘a youthful tale of geriatric amateur theatrics, its dramatic curtain call ensures this is one of the most powerful and affecting comedies of modern times’. I remember loving this when it was first published back in 1994. Time for a reread, I think.

That’s it for the first instalment of March’s paperbacks. A click on a title will take you either to my review or to a more detailed synopsis, and if you’d like to catch up with March’s new fiction it’s here and here. Part two soon…