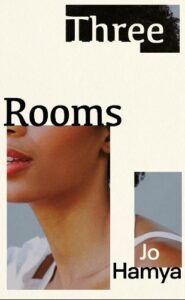 I seem to have been on a novella roll this year: Wherabouts, Blue Highway, Assembly and Stella to name but four outstanding ones. Jo Hamya’s Three Rooms looked like a possible addition to that list with its premise of a young woman who passes through the titular three rooms, barely scraping a living over the year the book covers in which the fallout of the EU referendum and the Grenville Tower disaster are a background hum.

You are brown and bourgeois, and the internet does not believe you exist

Our unnamed narrator of colour has been unemployed for a year. She’s an English graduate, taking up a short teaching assistant contract at Oxford with no real enthusiasm for an academic career. She installs herself in her room in the house once lived in by Walter Prater and his sister, Clara, now filled with postdoc fellows. She soon makes the acquaintance of her tea-drinking, Brexit-voting neighbour but rarely speaks to the other residents, becoming mildly obsessed with the daughter of a fading rock star who devotes more time to her Instagram account than her studies. Once her time is up, she leaves with no regret, moving her meagre possessions to the flat where she’s rented a sofa in order to take up another brief contract as a copy editor at a society fashion magazine. Here she spends four months not fitting in, learning to eke out her paltry wages by selling promotional freebies, speaking only to her colleagues and her flatmate. When the contract ends, she has little option but to give in to her mother’s pleas to return to the small market town where her parents live, spending time contemplating Tate Britain’s Turner collection before she leaves. Throughout it all, our narrator has left little or no impression, either on her surroundings or the people she’s met.

I wasn’t at all sure I would take to Hamya’s novella with its rather formal style, not one I particularly enjoy, but it suits its narrator well. She’s a bystander rather than a participant, and Hamya’s coolly distant voice emphasises that. Each of the three rooms has a section, ending with the Clore Gallery where our narrator gathers her thoughts about herself and her country, changed by the referendum vote which brought a simmering xenophobia and racism to the surface. Privilege and inequality, both intergenerational and socioeconomic, are adroitly explored. Events which mark the politically turbulent year beginning in the late summer 2018 provide a sharply observed backdrop and there’s some quiet humour to enjoy. I particularly liked the bookselling flatmate’s pithy riposte to ‘You’ve got the best job in the world’. I’m pretty sure Hamya worked in a bookshop at some stage. In some ways Three Rooms explores similar territory to Natasha Brown’s extraordinarily powerful Assembly. Of the two I prefer Brown’s novella, but it did set the bar remarkably high.

18 thoughts on “Three Rooms by Jo Hamya: Just passing through”