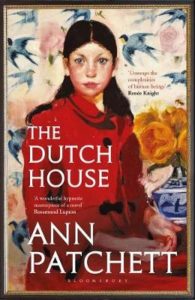 April’s paperback preview falls neatly into two parts – those I’ve already read and those I’ve yet to read. I’m beginning with the former, the first four of which were on my last year’s books of the year list. Hard to know which one to kick off with but I’m plumping for Ann Patchett’s The Dutch House, the story of an unusual house, almost a work of art, and the obsessions it sparks. It’s also the story of the Conroys, the family whose history is indelibly marked by this house whose huge glass windows leave them exposed to the world. Patchett’s writing is smoothly polished but it’s her storytelling, laced with an elegant wit, that kept me gripped, wondering what would happen to these characters whose lives are hedged around with secrets and silence. Altogether a treat: a book to curl up with and I think we could all do with one of those at the moment.

I’m sure the Conroys’ house was as important to them as the eponymous work in Neil Hegarty’s The Jewel was to its creator. Ostensibly the story of an art heist, Hegarty’s novel explores a multitude of themes through the stories of the theft’s three principle players – the thief, the art historian charged with displaying the piece and the specialist called in to help solve the crime. The result is a richly textured novel whose astutely observed characters have all endured tragedy and misfortune. This is Hegarty’s second novel and it did that rare thing: exceeded the high expectations raised by his fine debut, Inch Levels. I’m already looking forward to his third.

speculation as to Lucan’s fate, Dawson’s book reimagines the story from the nanny’s perspective. Her careful, compassionate and compelling novel honours Sandra Rivett’s memory, tipping the balance away from the media portrayal which reduced her to ‘the lovely young nanny’ rather than a vibrant woman with a life of her own. For me, it’s one of Dawson’s best, and that’s saying something after The Crime Writer, a wonderful piece of literary fan fiction starring Patricia Highsmith.

Paul Lynch’s Beyond the Sea is from Oneworld who’ve  bagged not one but two Booker Prizes in the last few years. Written in that spare, pared-back style which I so admire, this intense novella explores themes of faith, madness, survival and existential crisis through the story of two fishermen cast adrift after a dreadful storm. Hector and Bolivar are thrown upon themselves and each other in order to survive. As a bond forms between them, each begins to tell the other about their lives, their secrets and their fears but while Hector sees faith as their saviour, Bolivar puts his trust in resourcefulness.

Anna Hope’s  Expectation narrowly missed my books of last year list only because I was wary of stretching readers’ patience a little too far. Very different from her first two novels, Wake and The Ballroom, it has the kind of structure I find irresitsible, exploring friendship, motherhood, love and feminism through the lives of Hannah, Cate and Lissa who share a house together in their twenties. Hope bookends her lovely, empathetic novel with two sunny Saturday mornings, the first in 2004 when Hannah and Cate buy breakfast to share with Lissa at home and the second in 2018 when the three, now in their mid-forties, meet for a picnic. Much has changed in between – betrayal, grief, disappointment, pain have all been suffered along with forgiveness, joy and hope. I loved it.

I’ve not read anything by Laura Beatty before but I found Lost Property’s synopsis intriguing. A woman finds herself in a state of despair at her country’s apparent indifference to the suffering and poverty on its streets and decides she must find a way to understand how such a state has come about. This witty yet profound novel of ideas takes us across Europe in a second-hand camper van on a road trip through history, following our unnamed narrator’s quest for meaning. It’s not an easy

read but it’s a richly rewarding one, and it’ll make you think.

Marion Poschmann’s The Pine Islands follows a man woken by a vivid dream of his wife’s infidelity, convinced of its truth. He takes himself off to the airport, boards the first plane that will take him as far away as he can get, ending up in Japan where he becomes involved with a young man intent on suicide. It’s a playful yet poignant novella which I enjoyed although I was a wee bit surprised to see it shortlisted for last year’s Man Booker International Prize.

That’s it for the April paperbacks I’ve read. A click on a title will take you to my review should you want to know more, and if you’d like to catch up with the month’s new titles they’re here and here. Into uncharted april paperback territory soon…

I should be rushing off to catch the train to Ghent after posting this but with Belgium closing restaurants and museums thanks to covid-19 there seems little point. Never mind, It’ll still be there when all this is over. Take care and keep washing those hands.